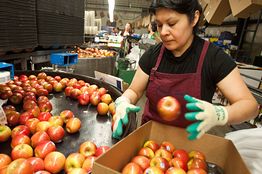 The TV world may love to hate Nielsen, but now the measurement giant is arming media companies with a new report that could aid their fight against digital rivals.

The message of Nielsen’s new Total Audience Report: comparing online video views with the audience of a TV program is an apples-and-oranges endeavor.

“It may seem that tens of millions of video views is a much bigger number than a few million persons in the audience of a TV program, but the TV number is expressing viewers in the average minute of the program,” Glenn Enoch, senior vice president of audience insights at Nielsen, writes in the quarterly report.

Video views, in contrast, tend to count gross viewers. In some cases, it may only take a few seconds of viewing to count toward the total. If TV viewing were counted in the same way, ratings for shows would be far, far higher, the argument goes.

But with a finite amount of ad dollars to spend, advertisers are keen on making those kinds of cross-platform comparisons.

To that end, Mr. Enoch and his team attempted to measure across different platforms to see where people really spend their time, from television and radio to PCs and smartphones.

However, when it comes to usage, those who do have smartphones use it nearly every day. Adults consume TV content an average 5.6 days per week, while 18- to 34-year-olds watch 4.7 days per week.

Still, the report includes some of the very data that is worrying the TV industry. Adults spent an average of 4 hours and 55 minutes per day watching live TV for the first quarter, down from 5 hours and 10 minutes last year. Smartphone usage, conversely, has continued to increase: 1 hour and 27 minutes per day in the first quarter, up from 1 hour and 12 minutes, according to Nielsen.

The report, Mr. Enoch admits, is full of caveats, reflecting the difficulty of cross-platform measurement. For example, the measurement of “smartphone video” encompasses apps specifically designed for video (like YouTube) while apps where video is not the primary focus (CNN, Weather Channel, Facebook) were not included.

The report comes weeks after both TV networks and digital competitors made presentations to advertisers at the upfronts and NewFronts, the annual bazaar where companies showcase their upcoming seasons and video offerings in the hopes of securing ad contracts. While digital media companies promoted their casts of stars and burgeoning Web video series, TV networks promoted their digital reach as well as investment in data-targeting technologies.

Meanwhile, media companies like Viacom have been public in their criticism of Nielsen. Viacom Chief Executive Philippe Dauman, for example, has said Nielsen has “not caught up to the marketplace” when it comes to measuring newer digital channels.