NEW YORK – A new study from the Video Advertising Bureau (VAB) has found a correlation between television advertising and traffic for mobile apps.

VAB evaluated TV spending and app traffic for 60 mobile apps across 10 categories (including games, e-commerce/retail, media, sports, and tech/telco) between October and December 2015.

VAB says 77 percent of those cases showed a direct correlation between television ad spending and app traffic: when television ads ran, unique visitors went up 25 percent. When ads didn’t run, visits dropped 20 percent. The correlation was most significant in the gaming category, which also has high appeal among millennials.

“There was a good correlation across all segments, but gaming had the highest,” says Jason Wiese, vice president of strategic insights for the VAB.

Danielle DeLauro, senior vice president of strategic and sales insights for the VAB, told Marketing Daily that television is “unparalleled” in its ability to sell products and apps are among those products.

“There’s a huge amount of apps for people to download … [and] to be a major player in the category, you have to have a TV campaign,” DeLauro said.

Video game makers (including mobile and console game creators) spent roughly $630 million on TV advertising last year, an increase of 47 percent vs. 2014, according to VentureBeat.com (using data from iSpot.tv). Mobile game companies have also increased their presence on high-profile TV events such as the Super Bowl in recent years, looking to generate more interest for their games.

“Every year, the amount their spending in this category is increasing, and we expect that to continue,” DeLauro said. 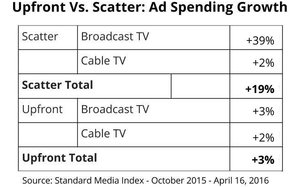 The data, provided by Standard Media Index, shows that while upfront spending has risen 3% through the first seven months of the 2015-16 broadcast year (October-through-April), the scatter marketplace has expanded nearly four times that rate: +19%.

The SMI data represents actual media buys processed by five of the six major agency holding companies (excluding WPP), and is considered directionally representative of the overall advertising marketplace in the U.S.

Scatter markets are the near-term quarterly markets that occur after long-term upfront ad commitments are made, and generally are considered an indication of demand going into the next season, because they reflect how much of the networks’ unsold inventory is being gobbled up — either from brands that held back on the amount of inventory they needed during the preceding upfront, or because new scatter market-only players are entering the marketplace.

The markets are not directly comparable for a lot of reasons, including the fact that upfront deals have better terms and conditions (including ratings guarantees, cancellation options and the ability to selected preferred inventory before it is sold in scatter), but the total of the two marketplaces represents aggregate network ad revenues and the absolute demand of the network TV ad marketplace.

“SMI’s numbers show the new broadcast year took off like a speeding train. Scatter spending in 2015’s fourth quarter zoomed ahead 27%, while upfront dollars rose a mere 3%. Then the spending eased off a bit in this year’s first quarter, to a 10% rise for scatter and flat for upfront spending,” writes SMI chief James Fennessy in a post on SMI’s blog analyzing the data today.

“The seven-month results for the current broadcast year are a dramatic improvement for TV sellers over the trend they were experiencing a year ago,” he continues, adding, “Scatter revenue was down 2% for national networks during the full broadcast year 2014-15 in comparison with 2013-14.  Upfront dollars were off by 6%, for an overall decrease of 5% in national TV revenue.”

The dozen advertisers that are growing sales the fastest are also the ones that are increasing their TV advertising spend the most. This could be coincidence, but more likely TV is a key factor.

I’ve been working with James Fennessy and his team at Standard Media Index (SMI), the only people who have the actual across-industry adspend data, on our joint presentation at ARF AM 2016 set for noon on Tuesday June 14, in which we will reveal the extent of return of dollars to TV and its upward ROI effects, the allocation of digital dollars to digital subtypes and other breakthrough insights.

In this process I noticed a dozen advertisers, seven CPG and five non-CPG, for which we were able to obtain sales data, that stood out from the rest in terms of exciting levels of sales growth — an average of +14.6% from Q1 2014 to Q1 2016.

I looked at a number of things that could have explained why these companies are winning. I noticed, for example, only small differences in terms of the types of digital media that they are using (which will be shown at ARF). The big obvious difference is that they have been growing their television advertising over this same period by an average of +25.8%.

This finding is consistent with the patterns we will be reporting at ARF across the top 100 advertisers — and with the findings of ARF’s Ground Truth initiative disclosed at the ARF March conference. Even before that conference some advertisers had detected that the shift of dollars from TV to digital had gone too far and they were seeing declining ROI, and began to shift back. On June 14 we’ll quantify this switchback trend in terms of number of advertisers by product type and overall ROI impact.

Looking forward to seeing you there.

The opinions and points of view expressed in this commentary are exclusively the views of the author and do not necessarily represent the views of MediaVillage.com/MyersBizNet management or associated bloggers.

It’s no secret that traditional advertising is increasingly ineffective, as online ad blocking and ad-skipping are becoming pervasive. Add another data point to the growing pile on ad blocking: In a survey of 1,015 adults by ORC International, in conjunction with ad-tech firm Mirriad, 76% reported blocking ads online and skipping traditional TV ads.

The study found the outlook for video advertising to be even worse: Ninety percent of people skip pre-roll ads appearing ahead of online video content and TV shows. While experts estimate that most Americans are exposed to around 4,000 to 10,000 ads per day, the messages are not sticking. The survey found that 68% of people recall less than five ads they’ve seen in the past week.

Juniper Research estimated in a recent study that digital publishers stand to lose more than $27 billion by 2020 as online publishers struggle to find effective strategies to counter ad blocking.

Among the other findings from the ORC-Mirriad study:

“These results reflect what most of us already know as individuals.  We skip ads. If we have a DVR, we skip ads. If we have mobiles, we skip ads. If we watch online, we skip ads — and given access to the right apps, we block them altogether. Why? Because they all too often get in the way of the experience we are looking for when we seek out the content we love. Most of us don’t like being sold to, especially by someone we don’t know. It’s just a natural human trait,” Mark Popkiewicz, Mirriad’s CEO, told Real-Time Daily via email.

“There must be a better way, because ads are an important part of the way content is funded,” he added. “In the future, ads must become more respectful of viewers and delivered in such a way so as to add value, be truly helpful at whatever life stage the consumer is at, and not manifest like a stick-up on a street corner at night: ‘Watch me or I’ll take your purse.'”

The online omnibus survey was live on April 25-27. Mirriad is a provider of native in-video advertising in which brands are integrated into content and travel with the content across screens.

All content published by MediaPost is determined by our editors 100% in the interest of our readers … independent of advertising, sponsorships or other considerations.
5 comments about “Survey Finds 90% Of People Skip Pre-Roll Video Ads”.
Check this box to receive email notification when other comments are posted.