AGENCY AND MEDIA REALIGNMENT AND REINVENTION

PORTSMOUTH, N.H. – It may be the perfect example of a marketing-services company putting its money where its mouth is: Advertising Age is reporting that analytics firm C3Metrics is running DRTV ads on entertainment and sports programming. And it’s working: the firm says it is winning attention from clients and new business.

The ad could be for any consumer product because it offers a proposition – the tried-and-true “free-trial offer” of C3Metrics analytics services for attributing sales lift from TV ads up to 50 brands monthly with TV budgets of at least $5 million.

The campaign has gained enough traction since it began in September that the firm is now putting $250,000 behind it monthly, AdAge reports.

C3 Metrics’ chief operating officer Jeff Greenfield told AdAge the company has clients spending up to $100 million a year on TV. “So we thought if this is working for them, there’s got to be a way to make it work for us, even if our audience is much smaller,” Greenfield said. “TV is still, in our minds, the most powerful medium out there.”

C3Metrics has tweaked ad creative at least a dozen times in the past year based on its findings and refined its TV buys using its own system.

One of C3’s new clients won from the campaign is PillPack, a startup that’s preparing a TV campaign for its concierge-style service that deals with doctors and insurers to get prescriptions filled, then puts them in easy-to-track-and-use packaging. PillPack executives discovered C3 from one of its TV ads that ran during June’s broadcast of the NBA Draft.

A.J. Resnick, director of acquisition and analytics at PillPack, said he was impressed by C3 using TV. “An attribution company doing TV is the kind of company we want to work with as a brand, because they’re able to know what’s working and what’s not,” he said.

Most marketing-attribution firms today, Resnick said, are focused on helping “rightsize wrong digital media buying, but my goal is to work with someone who knows how to leverage cross-platform – TV in particular.”

C3’s strategy sprang from discussions between Greenfield and C3Metrics CEO Mark Hughes. AdAge reports they wanted something to make C3Metrics stand out from the clutter. And they saw their biggest competitors as Google and Nielsen, “who can outspend us 1,000-to-one at every conference we go to,” Greenfield said, but aren’t using TV – at least not to promote B-to-B analytics services.

NEW YORK – CBS research chief David Poltrack told a group gathered at Advertising Week last week that advertisers are missing out on network TV, and then said, “Five years from now, people will remember this period for having the greatest amount of advertising money wasted in history.”

He added that advertisers are shucking “reliable, consistent metrics” for digital massages. For example he contended the report that millennials don’t watch TV is sometimes backed with dubious stats. He said it’s reported that Jimmy Kimmel’s nine million monthly views on YouTube overwhelm his ABC TV audience. But Poltrack said 43 million millennials see some part of Kimmel’s show every month.

Poltrack said he heard other Advertising Week panelists talk about audience measurement and concluded a lot of them don’t have the foggiest about what they’re measuring.

Poltrack spoke the day after comScore announced it had acquired Rentrak, a move that promises some renewed competition for Nielsen. Of course, Nielsen then announced that from now on, it will calculate CBS ratings adding in viewership from the CBS All-Access online service, laptop/desktop computers, and Android and iOS devices.

Nielsen global chief executive Steve Hasker, who was on stage with Poltrack, said Nielsen’s total audience measurement tool will be up and running for all by the end of the year.

Poltrack also made two other points of note: Over-the-air television would be a lot better off if it could undo the DVR. No news there but, but Poltrack presented that as a situation that still could be changed by more aggressive video-on-demand (VOD) and streaming efforts, where at least networks get to present commercials a user can’t bypass.

And he said there was research that said two-thirds of viewers who are using a second screen while watching TV have better recall than those just watching TV alone, because they’re likely to let the commercials hum along while they are occupied on a tablet or smartphone. “We tell advertisers: make sure you sell with audio,” Poltrack said.

The top 100 packaged-goods brands collectively saw sales and market share slip significantly in the past year, according to a report from Catalina, adding to recent reports of woe for the industry’s biggest players.

While prior reports have showed the biggest manufacturers in CPG have been shedding share to smaller ones for years, it was natural to assume top brands, which get the lion’s share of management focus and marketing dollars, were faring better than the overall companies. Not so, according to the Catalina report, drawn from a representative sample of scanner data from 26,000 food, drug and mass-merchandise stores in company’s in-store promotion network.

Catalina found sales for the top 100 brands collectively declined 0.8% to $56.8 billion, even as overall sales tracked by Catalina increased 6% for the year ended June 30.

The problem isn’t limited to any one category — such as food companies dealing with consumer shifts toward fresher, less processed options. Catalina found a similar pattern affecting baby, health, beauty, snack, household cleaning, beverage, pet, dairy, refrigerated meat and other categories. Frozen food had the biggest divergence, with sales of the category’s eight brands in the top 100 declining 7.8% even as the category grew 3.5%.

Overall, 62 of the top 100 brands had declining sales. Even the 38 brands with rising sales on average lost share, with sales up 5.5% vs. average category growth of 7.2%. In all, 90 of the top 100 CPG brands lost market share in the past year, according to Catalina.

Though it analyzes the market differently, Catalina’s findings are consistent with a report earlier this year from IRI Worldwide and Boston Consulting Group finding large CPG companies with sales of more than $5 billion annually collectively lost 2 points of market share in the $644 billion industry from 2009 to 2014. That continued a trend from a 2013 report, which found the big players lost 1.4 share points from 2009 to 2012.

Those IRI/BCG numbers don’t take private labels into account, but Catalina found store brands accounted for an outsized portion of the share losses for the top 100 brands in 12 of the 14 categories tracked.

The 32 brands that grew sales did so primarily by increasing consumption from previously “loyal” buyers who had made 70% of their category purchases from the brand in the past year, said Catalina U.S. President Todd Morris. New buyers accounted for only 0.7 points of the 5.5% sales lift for those growing brands. Defections from previously loyal buyers accounted for all the drop for the 68 decliners.

“Far and away, the current buyer of the brand is where the sales lift is won or lost, whether that brand is no longer meeting a need and demand is shifting to new or niche players or to private-label offerings,” Mr. Morris said. “We’re seeing the long tail of brands are winning the hearts and minds of shoppers.”

That echoes comments made by Unilever VP-Global People Data and Marketing Analytics Shawn O’Neal at an Association of National Advertisers forum earlier this month: “I’m not losing share to P&G and other CPG companies. I’m losing it to small players who are finding niche products.” 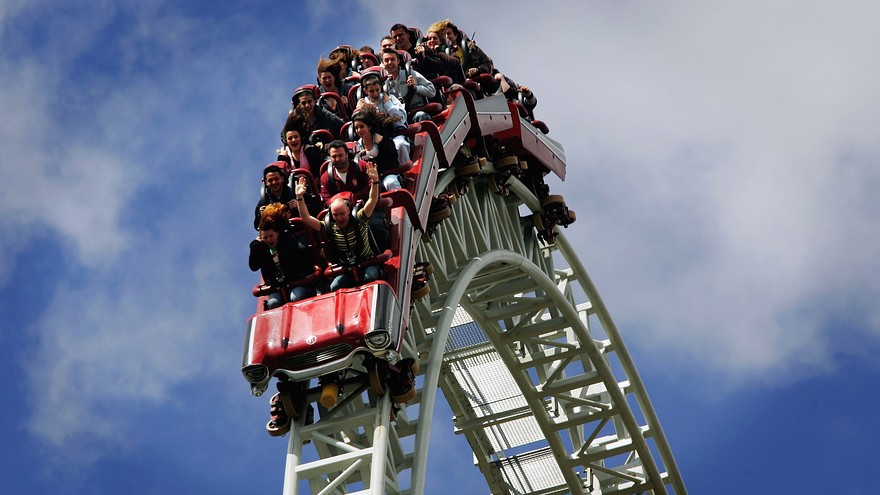 For investors in advertising technology companies, it has been an uneasy ride — and things keeping getting worse.

Share prices of publicly-traded ad tech firms are down significantly compared with six months ago, despite the fact that many companies showed strong growth between April and August.

The wider market has slowed since April too, of course, but many ad tech stocks fell significantly further than the S&P 500, which dipped 6.6% over the past six months.

Ad buying technology firm Rocket Fuel has seen its share price fall naerly 50% since April 1, for example. Yume is down nearly the same amount, TubeMogul has fallen about 25%; Tremor Video is off over 20% and Rubicon Project has dropped nearly 17%.

Industry observers attribute the declines to continued “confusion” about the companies among investors, and concerns about the growing dominance of the online ad market by major firms such as Google Inc. and Facebook Inc.

Serious questions about the future of ad tech and online advertising are also mounting. Some online publishers say they’re now actively avoiding working with third-party ad tech firms, for example, because they argue the vendors devalue their ad space.

Meanwhile the industry is struggling to come to grips with major challenges such as the growth of ad-blocking technologies, and the ongoing problem of fraudulent or “non-human” Internet traffic. 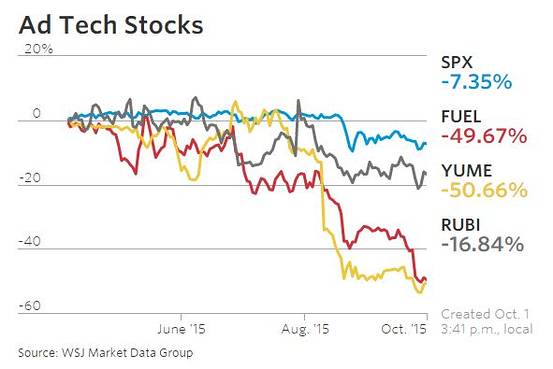 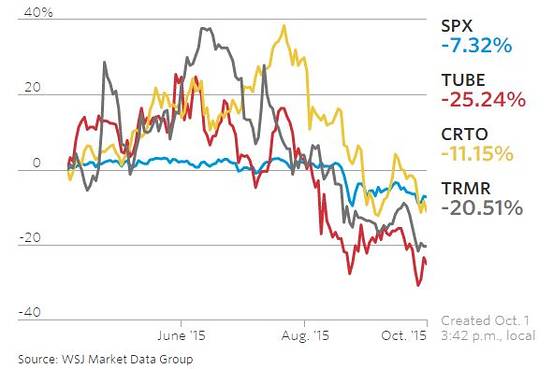 Write to Jack Marshall at Jack.Marshall@wsj.com